Cloud Nine (and Ten, and Eleven)

Saying cloud adoption is on the rise is one of the least controversial statements in tech, but all that demand manifested in some serious global expansion this quarter. While the list of providers who made moves to increase coverage is full of the usual suspects (Google, most notably), there were some decisive plays by smaller organizations as well in a clear constellation of efforts to court longtime tech-boom favorite Southeast Asia (SEA) and a growing Latin American market.

These expansions are interesting in that general “cloud growth = good” way, and we are going to look at some specific expansions of interest, but there’s a reason we’re pulling out global examples and looking at them in concert. Improved cloud coverage in historically underserved regions is a big deal not just for the businesses in that region, but for businesses the world over.

Having better access to cloud services, lower latencies, and an improved user experience means the goalposts for global application performance are shifting. Rapidly. If entire populations accustomed to lackluster performance in the applications they need to do their jobs suddenly enjoy the kind of low latencies users in well covered regions have come to expect, those users will also come to expect that kind of service in all their applications. To remain competitive on a global stage it’ll be absolutely necessary for SaaS businesses to expand their supported regions.

“Asia’s consumer markets are expanding and digitizing rapidly—and are benefiting from some of the most enthusiastic and tech-savvy customer bases in the world. The region accounted for 41 percent of global consumer demand in 2018, and is expected to account for 56 percent of growth in that demand in the period to 2030.”

As an example, Latin America’s startup ecosystem is minting unicorns left and right and significant performance advantages give new players an edge in their home markets over Silicon Valley usurpers. If American and European organizations want to compete, they’ll have to equitably serve their global audience. This sounds like a dire prediction, but the data is clear: every millisecond of latency counts. The question now becomes — just how much?

Last quarter Google announced a five year, $1.2 billion investment in Latin America, and that investment is already coming to fruition with a new cloud region in Mexico. This comes on the heels of other movement in the region including a Monterrey office expansion and the Capacita+ initiative. Google has been outspoken about their role in supporting Latin American startups — 13 of those aforementioned unicorns participated in Google for Startups — meaning this is less a move to capitalize on an extant trend and more a move to continue manifesting one.

Not one to be outdone, Oracle (bolstered by some serious growth) also announced a new Mexican cloud region in Querétaro. Seeing global movement outside the “Big Three” of AWS, GCP, and Azure is heartening, and it’ll be interesting to see where other providers plant a flag and find a foothold.

Latin America’s rapid cloud adoption, fueled in part by COVID-19 related IT investment, may have been the needle-mover timing-wise.

Despite some minor turbulence, SEA’s tech sector continues to grow and providers of all shapes and sizes are more than happy to meet a projected cloud demand of $282B by 2025. Google announced a slew of new cloud regions including Malaysia and Thailand, doubling down on their ongoing promise to “[deliver] a global network.” A proposition we can get behind.

Vultr similarly increased their commitment to a SEA presence with a new data center in Mumbai. While India has withdrawn its proposed data privacy legislation (which included some hefty data localization clauses in line with India’s strict payment processing laws), officials have been quick to assert that a new bill is on the horizon.

Having dedicated infrastructure in place to meet those current and future regulatory needs is not just clever, it may soon be mandatory.

It’s been a busy quarter for Oracle. In addition to their previously discussed Querétaro expansion, they’ve announced a new location in La Courneuve, Paris to compliment their extant Marseille Region. Oracle operates nine locations in Europe, stretching across the continent from London to Stockholm well positioning them for not only GDPR compliance but for more fiddly national regulations.

We’ve written about GDPR and GDPR-inspired data localization policies with an eye toward managing the requisite infrastructure fragmentation that follows. However, GDPR regulations only scratch the surface of Europe’s myriad privacy laws. Individual countries are constantly expanding upon GDPR with their own local policies. Germany was the first, and the Schrems II ruling may open the floodgates for even more specificity when it comes to data residency.

Much like the movements in India ahead of the next iteration of the PDPB, setting up redundancies within national borders and treating Europe less as a single region and more as a collection of diverse political jurisdictions will likely prove wise in the coming years. If not for the natural growth in cloud demand, then certainly for the continued skepticism toward Big Tech compliance.

Edge earned top billing this quarter with loads of interesting, thoughtful pieces about the current state of edge computing.

Research-wise, there’s been a subtle shift away from hypotheticals and toward assessing edge “for the rest of us.” More specifically, looking at edge for organizations that aren’t necessarily tinkering with IoT and are primarily concerned with putting their applications closer to their users. In fact, the number one draw to edge remains “latency, connectivity” by experts across industries. You can read those expert conversations courtesy of the Enterprisers Project here. Technically this was a last quarter find, but we’re willing to make an exception!

Also on the qualitative end of edge assessment, NS1’s INS1GHTS2022 produced an interesting keynote by Intel’s Bob Ghaffari about architecting for edge.

“We are in this era of sustained, long-term demand, with an insatiable need for compute.”
- Bob Ghaffari, VP Edge Group at Intel

The emphasis on programmable, flexible platforms was of particular interest. As was the demand for computing at the edge to allow data processing closer to the source. You can read NS1’s keynote recap here for the highlights and quotes of note.

Giving color to those anecdotes and insights is The Linux Foundation’s State of the Edge report, an excellent, in-depth look at a variety of edge topics around the world. It’s a long read, but the report is well organized and well worth the time.

“State of the Edge believes in four principles: The edge is a location, not a thing; There are lots of edges, but the edge we care about is the edge of the last mile network; This edge has two sides: an infrastructure edge and a device edge; Compute will exist on both sides, working in coordination with the centralized cloud.”

Finally, some edge-related self congratulations are in order — Seaplane has been nominated for the Edge Startup of the Year Award! We’ll be attending the Edge Computing World conference with an exclusive demo, so if you’d like an interactive look at what we’re building (and if you’ll be in Santa Clara October 11-12th) swing by our table.

We’d be remiss not to mention the multitudes of multi-cloud reports that landed this quarter! There’s a lot to cover and the numbers speak for themselves, so here are some quick hits:

“90% of respondents say multi-cloud is working, 86% rely on cloud platform teams, 94% are wasting money in the cloud”

While the full report is worth a read, Hashicorp also put out a high level review on their corporate blog aptly titled “Multi-Cloud Is Working.” A serious point of interest is the focus on platform engineering and the perils of cloud skills shortages. In fact, cloud skills shortages were considered the top multi-cloud barrier by survey respondents.

Virtana: The State of Multi-Cloud Management 2022

VentureBeat has already covered the highlights — but to make a compelling story about an industry-wide transition short: most organizations are already multi-cloud, and it’s a struggle to avoid complexity and tool sprawl.

“Spending on compute and storage infrastructure products for cloud deployments, including dedicated and shared environments, increased 17.2% year over year in the first quarter of 2022 (1Q22) to $18.3 billion.”

What makes this IDC report interesting isn’t necessarily the consistent market growth or the sheer amount of investment in cloud products — it’s the fact that, for the first time, the amount spent on shared cloud infrastructure will eclipse spending on traditional IT gear for data centers.

ZDNet has a solid writeup worth a browse.

Mechanical keyboards are hitting the mainstream to the mixed horror and delight of keyboard hobbyists everywhere.

David Owen’s article “The Obsessive Pleasures of Mechanical-Keyboard Tinkerers” for the New Yorker shed some whimsical light on a topic many of us in tech-land have loved for years. It’s a wonderful homage to the hobby and was a favorite amongst the Seaplane team this quarter. We’ve never felt so exposed or so seen.

Of course this made us wonder, are there any mouse (mice?) hobbyists? The answer is, naturally, of course. Whether it’s stylish, limited-edition ultralight mice from finalmouse or vertical mice of all stripes, if there’s hardware to customize you can bet there’s someone out there attacking it with a screwdriver. Or a 3D printer — shout out to Chocofi! 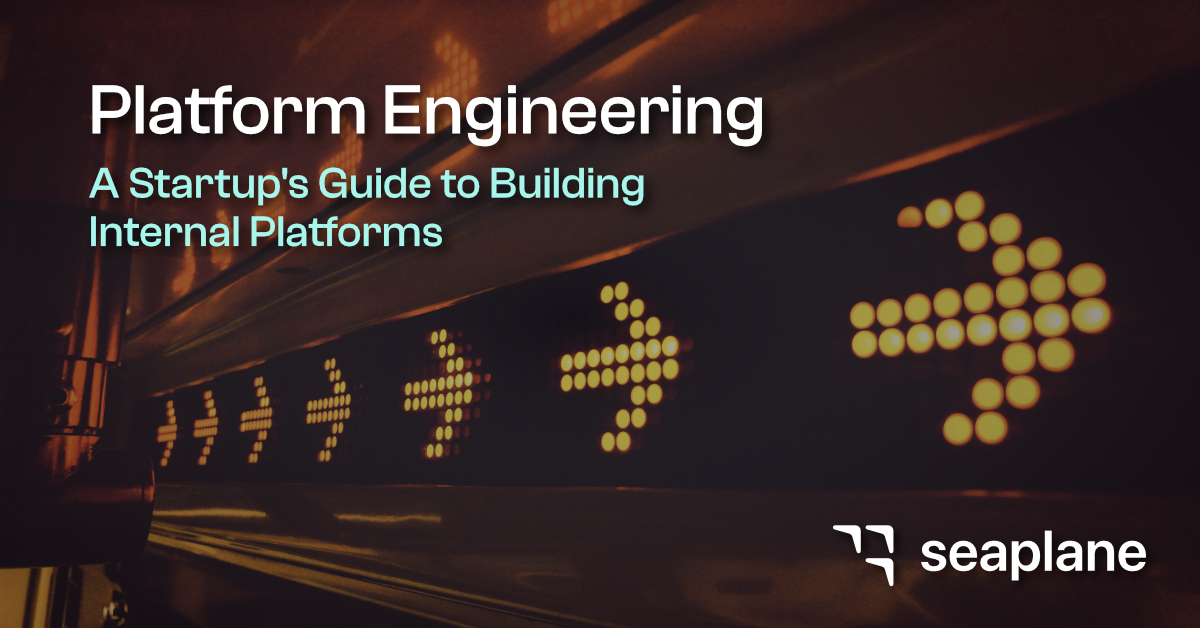 The Startup’s Guide to Platform Engineering

Platform engineering has improved operational efficiency for software teams of all shapes and sizes, but what is platform engineering? We’re taking a look at internal developer platforms and how to build one that works for you and your team.
Fundamentals 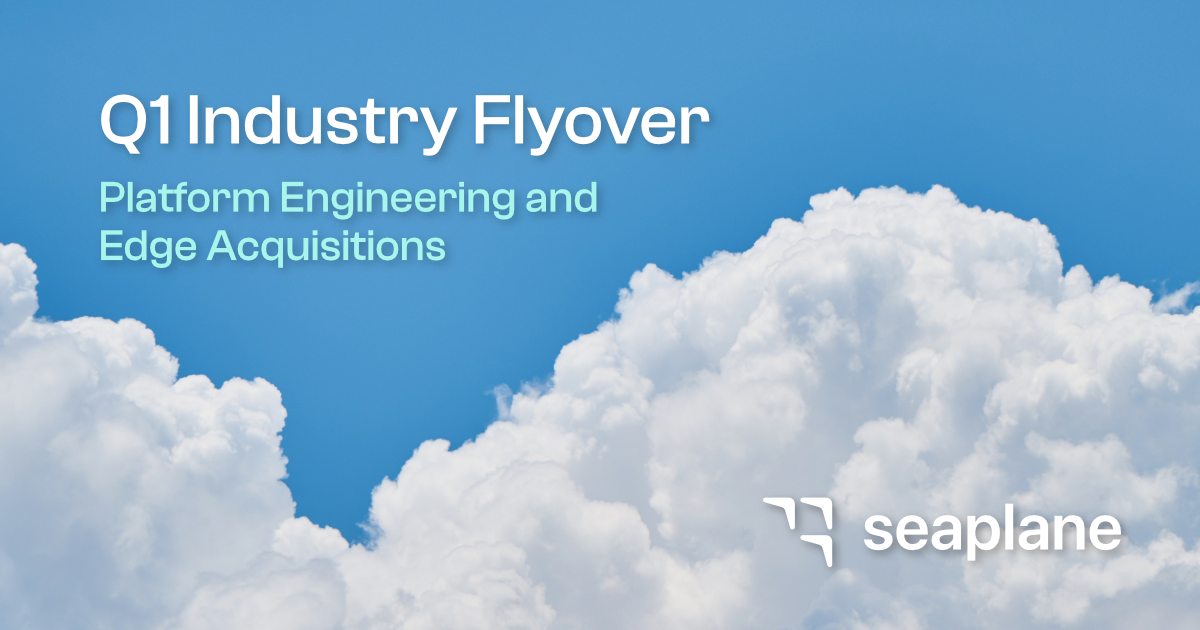 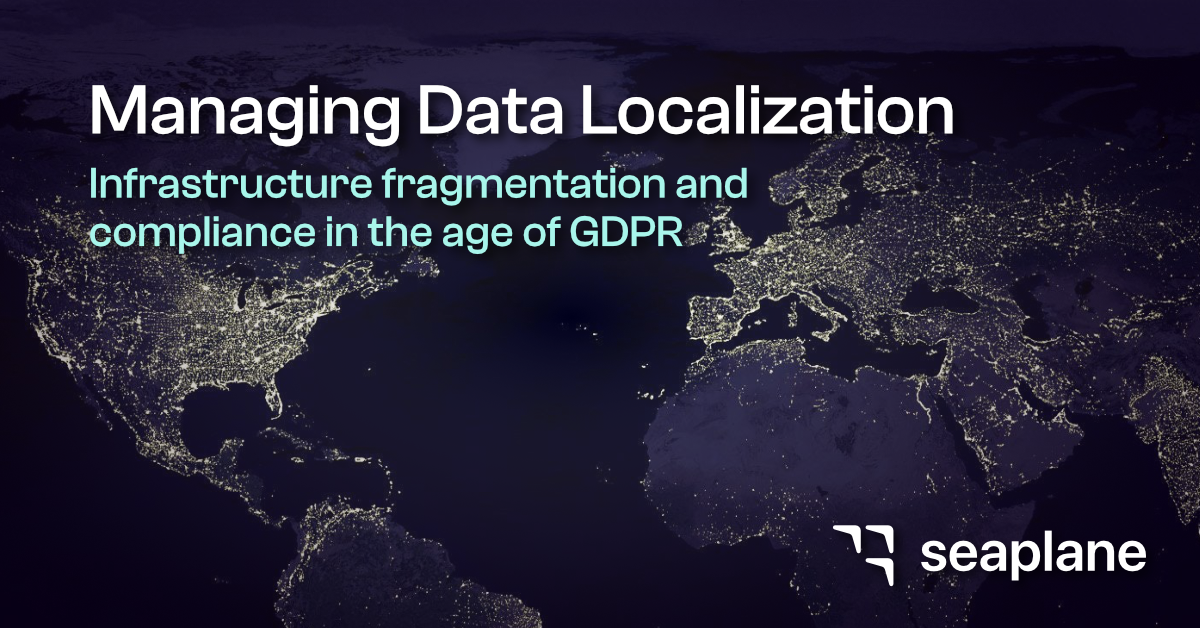 Data localization, data privacy, data regulation — there has been a lot of “data” in international headlines of late. What does that mean for your organization and your engineers?
Industry