It’s the end of a quarter and a lot can happen in three months time. Now that spring has finally sprung we’re taking a look back at some of the stories we found interesting over the past few months.

DevOps By Any Other Name

The course of innovation never did run smooth, and standardized terminology is one of its most obvious victims. The struggle to give words to complicated, ever changing concepts is a challenge that touches all facets of the tech industry. It makes building hard, it makes collaborating hard, it makes documenting hard, it even makes hiring hard. When there is no common meaning for terms like “DevOps,” “SRE,” and “Cloud Architect” job boards quickly become a disorganized mess of catchalls and caveats.

Lack of standardized lingo is something we’ve dealt a lot with here at Seaplane. We regularly sift through jargon in an attempt to find words that adequately describe technology that doesn’t fit neatly into the already fuzzy space of cloud computing. As a result, one of the terms we’ve bumped into most in the past year is “Platform Engineering.”

But what is platform engineering when divorced from all the buzzwords?

Software Engineering Daily’s article detailing the rise of platform engineering and the evolution of infrastructure teams is a great primer and a solid attempt to get everyone speaking the same language. There are clear through lines from traditional infrastructure organizations to modern platform teams, including in the ways we talk about them, but those threads often get lost in a shuffle of a messily evolving framework. Seeing it all laid out is helpful for any company preparing to leap into the cloud. It’s especially useful for understanding the concepts at play and how new jargon integrates with, or expands upon, the old.

"With [cloud] migration comes a need for expertise in the cloud and container orchestration. So, organizations are beginning to question whether they should form a platform engineering team."

There’s a clear bias in the article toward building a platform team in-house, which makes sense given that the complexity of language is an outcropping of the complexity that comes along with “the increased popularity and extensibility of cloud providers, Kubernetes, and infrastructure as code.“

Along these same lines, Andreessen Horowitz’s recently revisited Guide to Modern Data Architecture translates the ideas behind platform engineering into implementable data stacks, but even a quick glance at the structural diagrams reveals the truth: these systems are complicated, and the need for platform teams is an indirect expression of cloud complexity.

A clear divide is emerging between the ways organization are tackling that complexity. Either you hire the engineers required to build a custom cloud solution (resulting in a high total cost of ownership but lower vendor costs upfront), or you use managed services (which doesn’t require hiring, but does expose you to lock-in and a lack of customization).

As market demands for better performance, better availability, and better fault tolerance increase, the need for multi-region, multi-cloud, and edge deployments also increases in order to meet that demand. Suddenly platform engineering, which is already complex, is even more complex and requires even more resources to manage.

While some public clouds work to provide out of the box multi-cloud support, that introduces even more lock-in as provider-built control planes are still provider-built, and will ultimately steer decision making and resource allocation.

At scale all those concerns intensify and crystalize into an all or nothing game where a single provider has a stranglehold on your infrastructure, or you invest millions of dollars and hundreds of hours into building a robust platform team.

Naturally, we think there’s another way with Seaplane, but that’s another blog for another time.

January is a time for white papers, retrospectives, and annual research reports, so it’s no surprise that we found so many noteworthy entries this quarter. The Nutanix Enterprise Cloud Index is particularly fascinating as it establishes the desire of large organizations to adopt multi-cloud models, and gives shape to the unique challenges of doing so. Nutanix identified integrating data across providers as one of the most crucial concerns (followed closely by cost) in moving to multi-cloud. Their findings echo our own smaller-scale research initiatives which uncovered implementation complexity as the top blocker for organizations that wanted to transition from single region deployments to multi-region, and multi-cloud deployments.

But as the old saying goes: mo clouds mo problems.

"A hybrid multicloud model requires that enterprises adopt tools that unify and, to a degree, automate cross-cloud operations and management."

Synergy Research Group reported in February that quarterly cloud spending has topped $50B with Public IaaS and PaaS services accounting for the bulk of that spend. There’s something to be said about the proliferation of increasingly abstracted managed services, and the need to spend above and beyond the initial resource investment in order to make proper use of those resources. So long as demand for tech talent remains high, managed services offer a more cost effective alternative for small businesses and startups who don’t need a full fledged platform team but still want the benefits using cloud resources. This isn’t to say that wiring together so many services is simple (it isn’t) or that these services lend themselves to hybrid multi-cloud strategies (they don’t) but that all signs point to a desire for simpler solutions to a very complex problem.

We all know tooling will be the key to multi-cloud deployments, but that tooling is unlikely to come from the providers themselves. Not when allowing customers to easily switch to other providers or spread their spend across multiple resources is an obvious blow to the bottom line.

Other market research done by Gartner and Flexera paints a similar picture of multi-cloud implementations, placing the percent of organizations polled with a multi-cloud strategy in the low 80’s and high 80’s respectively. This is partially out of necessity. Large acquisitions come with plenty of stack-related baggage, and because managed services don’t translate easily across providers, the desire of any given platform team to burn down their current implementation is understandably low. It’s also due to customer demands. The inability to integrate with multiple clouds can be a deal breaker for clients who rely on specific services from specific providers, or have contractual obligations that prevent them from using one cloud over another.

So long as businesses are carrying on business as usual, it’s challenging to remain “just” an AWS or GCP or Azure shop.

While there were plenty of acquisitions and launches of note over the last three months, a few caught our eye as heralds of change within the industry.

Edge computing is one of those topics that generates a lot of buzz, but we’ve only just begun to crest the hill of early adoption beyond limited contexts like manufacturing and related IoT projects. The “Fourth Industrial Revolution” is here, and we’re seeing strategic movements by big tech players to get ahead of the game and secure the vital resources they’ll need to make a strong opening move on the market.

In terms of launches and expansions, F5 recently announced their new distributed cloud platform, which includes a cloud-native edge computing service, to more comprehensively support organizations transitioning from legacy systems to cloud and multi-cloud strategies. AWS has also publicly announced their desire to go all in on edge.

"Ultimately, AWS Local Zones are all about supporting the burgeoning edge computing movement."

This quarter’s acquisitions also point toward edge as the bet du jour as Akamai bolstered their edge network with their high-profile acquisition of Linode in a bid to, as reported by TechCrunch, “become the world’s most distributed compute platform, from cloud to edge.” Limelight acquired Yahoo’s Edgecast CDN and even plans to rebrand as “Edgio” in an overt play to capture the growing market.

The edge has existed as a natural extension of the cloud in the popular consciousness for about as long as edge computing has existed, but seeing so many concrete moves by cloud providers to unify the two into a singular resource pool solidifies that belief into bonafide fact. The edge is not a separate, glued-on piece of infrastructure. It’s a core piece of the serverless puzzle, and it offers the unique benefit of being highly local in a way public clouds aren’t.

The edge has evolved beyond early, limited uses in CDNs and IoT and is now a critical component of any comprehensive distributed compute model. The many acquisitions, expansions, and mergers are proof positive that soon no cloud strategy will be complete without it. In fact we believe edge is so critical to a holistic cloud strategy that we’ve built our own global edge and integrate those edge resources, seamlessly, with every major cloud provider. Your deployments should go where your users are, without any additional cost or complexity.

Distributed clock synchronization is a surprisingly complex challenge, and it’s one we find deeply interesting! If you’re looking for a good read about keeping time across distributed systems, we highly recommend this blog by Yugabyte CTO Karthik Ranganathan. We manage a lot of little moving parts in order to make Seaplane tick (excuse the pun) so this peek under the hood is particularly intriguing.

If you can’t get enough of that timekeeping goodness, a few of our engineers are big Time Nuts. 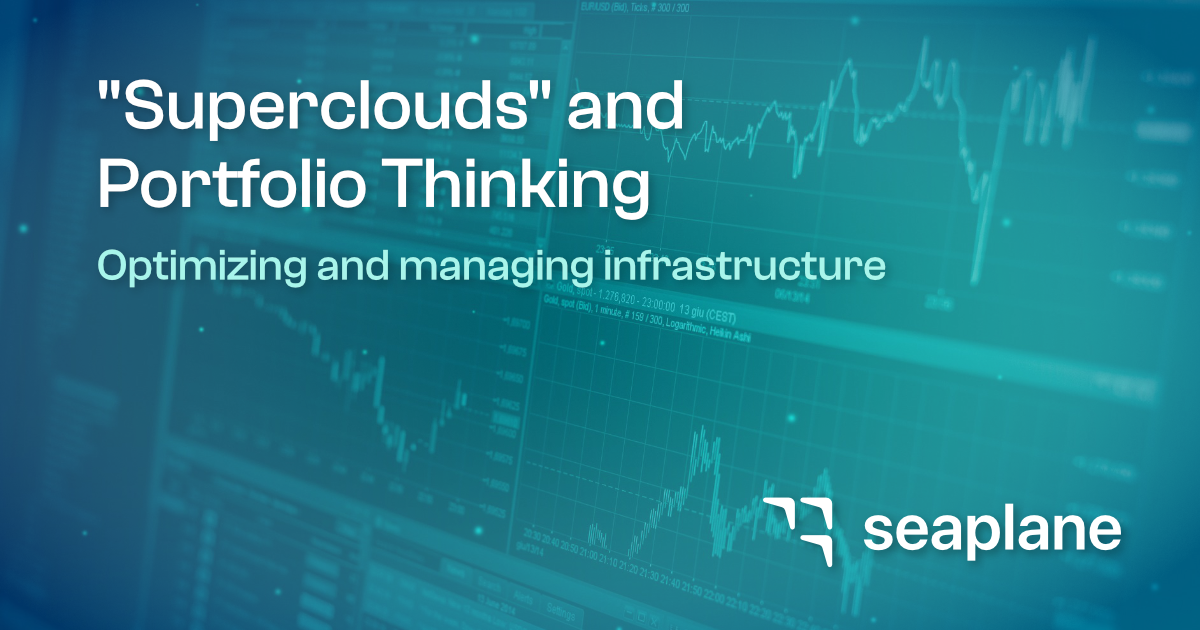 An organization’s infrastructure mix increasingly looks and acts like an investment portfolio — here’s a look at “supercloud” solutions that enable portfolio-style optimization.
Industry 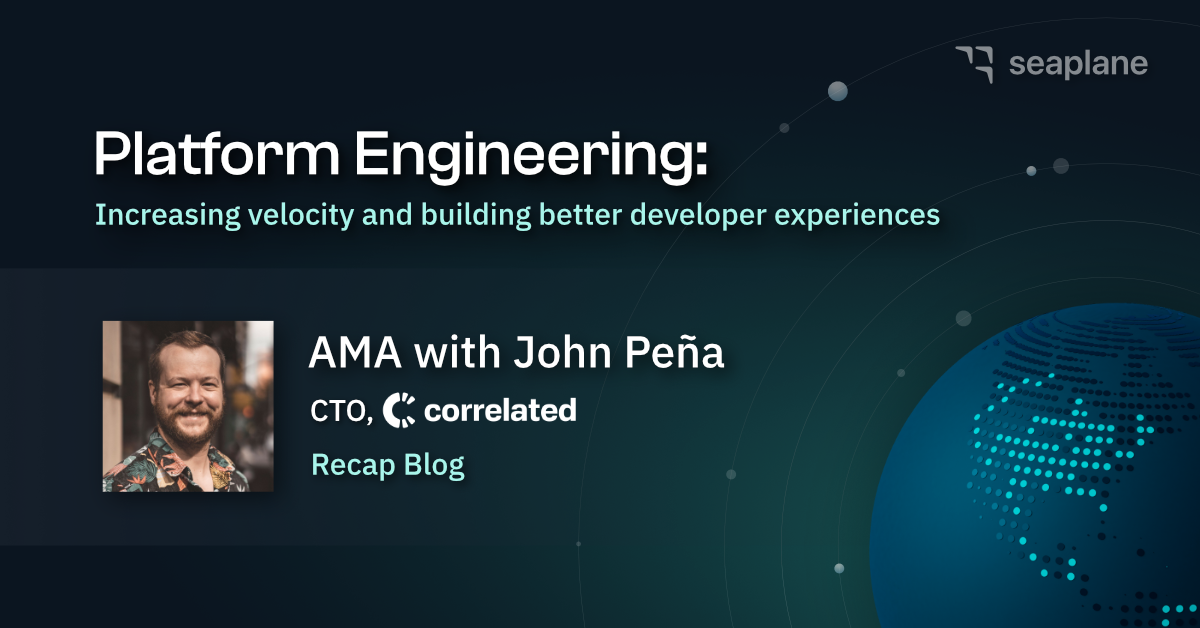 We sat down with Correlated CTO John Peña for a live Ask Me Anything (AMA) event to talk about his experience with platform engineering, scaling a startup, and effective developer tooling.
Industry 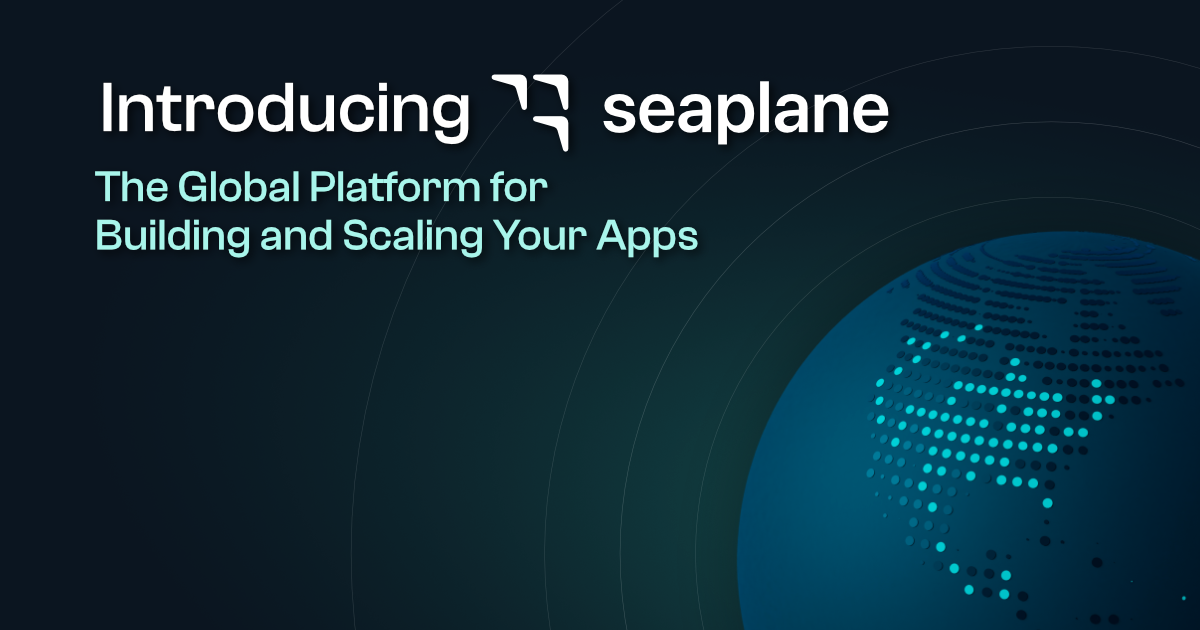 Introducing Seaplane: a user-centric control plane that continuously optimizes the use of global infrastructure to deliver applications when and where they are needed — resiliently and performantly.
Product